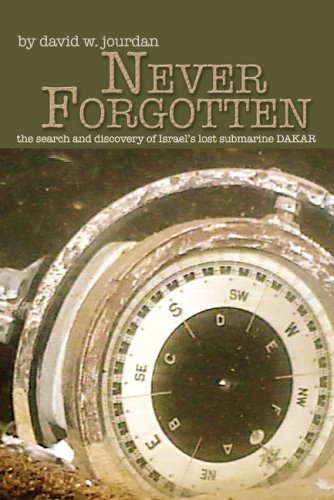 After the submarine DAKAR went down somewhere in the Mediterranean, Israel spent 31 years searching for the sixty-nine officers and crew. Newly purchased from the Royal Navy, along with two of her T-class sisters, she was commissioned into the Israeli Navy on 10 November 1967 as Dakar (“Swordfish” in Hebrew) and en route to Haifa after completing sea trails in England. On January 25 1968, two minutes after midnight, the Dakar transmitted her last communication Compelled by one of Israel’s strongest military traditions to bring home all killed and missing during battle for a proper Jewish burial, over 25 expeditions were launched and to search different areas of the Mediterranean. Imagine the national frustration of not being unable to find a massive 287-foot submarine that was lost for over 31 years, and not knowing the fate of the men of the DAKAR? This was the problem faced by the Israeli Navy in 1996 when it invited David Jourdan and his company Nauticos to conduct the search which led to discovery in May 1999. “NEVER FORGOTTEN: The Search and Discovery of Israel’s Lost Submarine DAKAR” tells the exhilarating story of the will, endurance, and technical know-how of extraordinary people who made a lifelong impact on an entire nation and sixty-nine grieving families. NEVER FORGOTTEN is a first-person account that grew directly from Jourdan’s successful career in deep-sea searches. The narrative follows the technological quest to locate the missing ship, 10,000 feet deep, and then try to discover the cause of the disaster. Included is the story of the DAKAR itself, beginning with its origins as the WWII British HMS TOTEM, through its sale to Israel, and the last, fateful voyage from which it never returned. Through it all we follow the families of the lost crew, from their pride in the DAKAR, to their horror of its loss, and their closure with the discovery of their loved ones’grave site. A dramatic final chapter imagines what the crew of the doomed submarine might have been doing in the final seconds before a massive implosion snuffed out their lives.While the exact cause of the loss is still unknown, it is likely that a catastrophic hull rupture occurred during a dive since it appears that no emergency measures had been taken before Dakar dove rapidly through her maximum depth. On 11 October 2000, Dakar’s bridge and forward edge of her sail were raised, and are now a memorial display in the Naval Museum in Haifa. Recover the remains of the crew members and giving them Jewish burial in Israel was finally abandoned, due to the enormous cost of such an operation and in deference to the long-standing maritime tradition of letting the sea bottom be the final resting place of drowned sailors. The crew members’ families had to content themselves with holding a ceremony in a ship over the submarine’s remnants.In the thirty-year period between the loss of the submarine and the final discovery of its remnants, various suppositions and Cold War conspiracy theories circulated. Many Israeli cities and towns have a Dakar Street, and several schools and other public institutions are also named for the lost submarine. “Full Circle,” a television documentary of the project was first aired on the National Geographic Channel in November of 2003, adding to public recognition of this event.

Order your autographed book for only $24, and save $4 off list price!