Nauticos Corporation was founded in September 1986 and provides ocean technology services to government, science and industry. In 1995, Nauticos Corporation received international recognition for its participation in the discovery of the I-52, a historic World War II deep-water shipwreck of a Japanese submarine found at a depth of 17,000 feet. After this discovery, Nauticos Corporation began its expansion into ocean exploration and discovery. In 1998, Nauticos Corporation managed the operations for “Titanic Live”, a live broadcast from the bottom of the ocean, for the Discovery Channel and NBC’s Dateline.

In 1999, Nauticos Corporation again gained worldwide recognition for the discovery of the DAKAR, an Israeli submarine lost in the Mediterranean Sea in 1968. Many previous efforts had failed to find the lost submarine, but Nauticos Corporation located the DAKAR off the coast of Crete at a depth of 10,000 feet by relying on its proprietary RENAV software to define the search area. This project culminated in the recovery of a 4-ton piece of the hull that was delivered to Haifa, Israel for preservation and exhibit in a memorial to the crew. At the same time, Nauticos Corporation teamed with the Naval Oceanographic Office to locate wreckage from the Japanese aircraft carriers sunk at the World War II Battle of Midway in 1942. The discovery of the Kaga, lying at a depth of 17,500 feet, was the subject of a Discovery Channel documentary that appeared in December 2000. During the DAKAR operation, Nauticos Corporation also discovered an ancient shipwreck dating back to the third century BC, with thousands of archaeological artifacts in pristine condition. The Institute of Nautical Archeology at Texas A&M University claims that this wreck is the oldest, deepest shipwreck yet discovered.

2001 saw the company embark on a program to search for Amelia Earhart’s lost Electra, with the first expedition setting out in February of 2002. Though the plane was not found, a significant portion of the search area was covered using NOMAD.

In 2003, Nauticos Corporation was merged with Oceaneering International, which continued much of the government and industry work the company had supported over the prior seventeen years. As part of the agreement, founder David Jourdan formed Nauticos, LLC, which continues the program of Ocean Discovery projects that the company had been pursuing. In 2006, Jourdan led a second expedition to the Earhart search area, and covered more territory. He also supported projects in such diverse areas as the use of deep-ocean water, historical shipwreck searches, and stratospheric exploration. 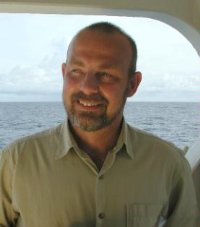 David W. Jourdan is the founder and president of Nauticos LLC, a company devoted to the exploration of the deep oceans.

His career of nearly 30 years has been devoted to the exploration of the deep oceans, concentrating in the areas of remote sensing, underwater navigation, and renewable energy applications.

During his commission as a U.S. Navy submarine officer and as a physicist at the Johns Hopkins University Applied Physics Laboratory, he became an expert in the exploitation of large undersea environmental data sets, specializing in information collected by U.S. Navy ocean research submersibles and associated development programs.

As leader of Nauticos for over 20 years, he has continued to support scientific, archaeological, and military programs. These include the development of oceanographic database systems for the Navy, development and use of Kalman Filter navigation analysis software for submarine inertial navigators, and support of autonomous underwater vehicle (AUV) test programs. More recently, he has worked on projects to develop the use of cold Deep-Ocean Water for fresh water production, cold agriculture, and other renewable energy applications.

In 1999 Mr. Jourdan was honored as Maryland’s Small Business Person of the Year and awarded Ernest and Young’s Entrepreneur of the Year in Science and Technology. He is an International Fellow of the Explorer’s Club, and a member of the Sea-Space Symposium.