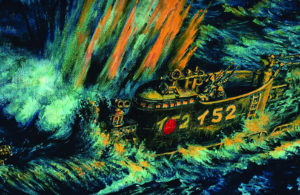 The Sinking of Japan’s Secret Submarine I-52

Among the central narratives of World War II were the pursuits of intelligence and commerce. The Allied codebreakers’ contributions were vital to the outcomes of the great turning points of the war. Likewise, the ultimate defeat of the Axis was aided immensely by the denial of key resources as Germany and Japan were increasingly starved of the means to continue to fight. The story of the sinking of the Japanese cargo carrying submarine I-52 typifies both of these narratives, and provides a unique chronicle of a combined air, sea, and undersea battle. Its mission, cargo, and movements were known to the Allies by codebreaking efforts, and its loss denied Germany of sorely needed raw materials and weapons technology. Research led to the discovery of one-of-a-kind recordings of  American Avenger torpedo bomber attacks on the enemy submarine and the accounts of the veterans who flew the aircraft, both in contemporary reports and interviews over fifty years later The companion modern day story of the search for the wreck of I-52 and its discovery on the seafloor, nearly intact, over three miles deep, is itself a unique tale. One of the first joint American-Russian research expeditions, it is a story of technology, teamwork, detective work, cultural engagement, and mariners’ struggles with the sea.