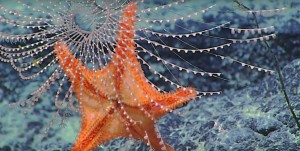 Though our Nauticos team was disappointed that bad weather forced cancellation of our dives on the site of the Battle of Midway, we took heart in what was accomplished.  The expedition yielded a great wealth of baseline information about the largely unexplored Northwest Hawaiian Islands National Monument. Eight ROV dives identified 249 different types of organisms, and 34 geological and biological specimens were collected including 13 species unknown to the region (or in some cases the planet). Dozens of scientists and students from around the world participated via telepresence, and many followers watched live feed through our Expedition Portal. A video of mission highlights can be seen here, courtesy of the NOAA Office of Ocean Exploration.

After a short port visit in Kwajalein for resupply, NOAA Ship Okeanos Explorer is conducting mapping operations to explore the largely unknown region surrounding the Wake Island Unit of the Pacific Remote Islands Marine National Monument. Our Expedition Portal continues to connect to live feeds from the ship, so check in for updates and continue to follow and explore the deep sea with us! 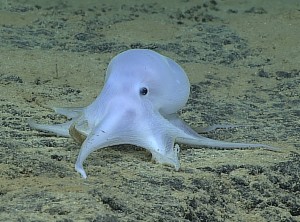 It was my first time watching live video from the deep seafloor via telepresence–from the comfort of my home computer. I was astonished to witness amazing imagery of a beautiful translucent pale blue octopus, and the mission scientists seemed just as excited and flummoxed. Turns out this strange finless cephalopod was the first of its kind seen by humans, and at 14,075 feet was the deepest ever seen of this type.

In this video, courtesy of the NOAA Office of Ocean Exploration, on-board scientist Daniel Wagner narrates the scene as shore-based scientists express their feelings of thrill and awe.

The discovery was made by the ROV D2 deployed from the Oceans Explorer on February 27th while exploring Necker Ridge, southwest of Kauai in the Northwest Hawaiian Islands Marine Sanctuary. All of us following this groundbreaking expedition are privileged to witness this and other undersea discoveries as they happen. Live feed and replays of earlier dives can be seen though our Expedition Portal. 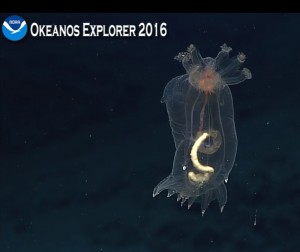 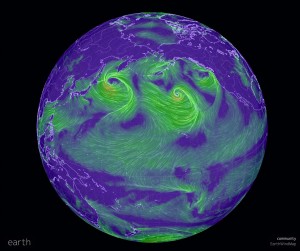