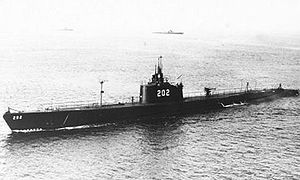 Late December 1942 saw the evacuation of Manila, and Allied forces led by General Douglas MacArthur were in full retreat down the Bataan Peninsula. By January, just weeks after the Pearl Harbor attack that started the Pacific war, the situation in the Philippines was dire, with remaining forces preparing to make a last stand on the island fortress of Corregidor. The 13,000 American and Filipino troops and thousands of fleeing civilians were desperate for food, medical supplies, and ammunition. A particular need was anti-aircraft shells to stem the deluge of bombs falling on Allied positions. A naval and air blockade prevented supply ships from approaching, so the Navy called on the submarine force to help. USS Trout (SS-202), commanded by Mike Fenno, was loaded at Pearl Harbor with 3,500 rounds of vital munitions, and slipped into Manila Bay on 3 February under cover of darkness. Weaving a winding passage through a minefield, the boat reached the docks and quickly unloaded her cargo. Having removed most of her ballast and even torpedoes to make room for the cargo, Fenno had a problem: he needed to add weight to be able to submerge. He drew ten torpedoes from the stocks salvaged from the base at Manila, and 27,000 gallons of fuel oil, but was still over twenty tons too light. He requested twenty-five tons of sandbags but was denied, as sandbags were a precious commodity on Corregidor, used to construct defensive positions. The defenders offered an alternative, something very heavy that was quite valueless to them: twenty tons of gold and silver that had been removed from Manila banks to the island fortress for safekeeping.

Hurrying to finish before dawn, solders and sailors loaded several hundred burnished yellow bars of gold, weighing about forty pounds and valued (in 1942) at $23,000 each. Of course, to the defenders at Corregidor, they were worthless. To the six tons of gold was added heavy sacks of silver pesos, each containing a thousand coins and together weighting eighteen tons. The $10 million ballast was carefully inventoried and a receipt was presented to the captain. Fenno hastily signed it, adding a note that he had not been able to personally verify the tallies.

Hastening to sea before daybreak, Trout submerged and spent the day quietly resting on the bottom. The next evening, she rendezvoused with a patrol boat that delivered a final load of mail, securities, and other items. On the return voyage, regardless of the unique cargo on board, the submarine reverted to its war patrol mission, attacking several ships and sinking a freighter. Upon arrival back at Pearl, Fenno was hailed a hero and awarded the Army Distinguish Service Cross. But he had a problem. According to the inventory, one gold bar was missing! An inch-by-inch search of the ship uncovered the misplaced bar in the galley, where one of the cooks claimed he was using it as a paper weight.