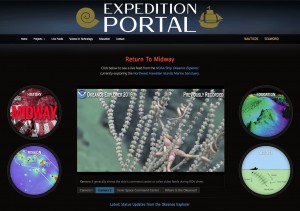 The NOAA Okeanos Explorer is currently at sea mapping and imaging sites from Necker Ridge to French Frigate Shoals in the Northwest Hawaiian Islands chain. Spectacular images from the seafloor have been collected, as well as rock and biological samples. As of February 29, the vessel is dealing with very bad weather and has cancelled the day’s dive. However, one can see replays of earlier dives and follow developing events live though our new Expedition Portal. This site has been launched to support educational outreach and general public interest in undersea exploration as we plan dives on the site of the Battle of Midway on March 5 and 6. Besides the live feeds, one can explore the history of the battle, view images of prior expeditions, learn about the science and technology of deep sea research. Educational materials and mission updates will be added over the course of the expedition.

Click on the image to launch the Portal. Check out Camera 1 and 2 to see what is happening and replays of earlier ROV dives. Select “Where is the Okeanos” to see where the vessel is and has been. Dive into the Portal windows to learn more. Keep checking as we upload new content during the expedition. And share the link with anyone interested in exploration!

This Portal was made possible by the generous support of Collins Aerospace and the SeaWord Foundation.

ROVs – Remotely Operated Vehicles – allow us to look and touch at the bottom of the ocean where no human can survive. Most deep sea ROVs can dive to 6,000 m (20,000 feet), allowing them to reach 95% of the ocean floor. At that depth, water pressure approaches 9,000 psi! Tethered to a research vessel with a long cable that provides power and receives images and telemetry, the ROV uses thrusters to move and position itself to get the best view or grab the most valuable sample with its robot arms. ROVs come in many sizes, from the monster machines that service offshore oil installations or bury cables, to the suitcase-sized SpiderBOTs made famous in the movie Titanic.

In 1999, Nauticos used an ROV operated by the Naval Oceanographic Office to discover wreckage from the Japanese aircraft carrier Kaga, sunk at the Battle of Midway in 1942. You can read about this project and the history of the battle in The Search for the Japanese Fleet. Nauticos and the SeaWord Foundation plan to work with NOAA’s Deep Discoverer ROV in early March to return to the site and capture hi-def video of the wreckage, far superior to what was possible nearly 20 years ago.

Nauticos also used the ROV Remora in 1999 to identify the wreck of the Israeli submarine Dakar, and returned to the site the following year to recover a 4-ton artifact from the seafloor at 10,000 feet. Operators on the ship high above watched through remote cameras to operate mechanical arms and manipulators to attach a lifting line to the structure of the artifact so that a winch could slowly lift it to the surface. After nine hours, the conning tower of Dakar emerged from the sea after resting there for 31 years. The tower is now on display at the Naval Museum in Haifa, a memorial to the 69 sailors who lost their lives on the ill-fated warship. This story is chronicled in Never Forgotten: The Search and Recovery of Israel’s Lost Submarine Dakar. This 3-minute video, produced for the Maryland Science Center Titanic exhibition, includes scenes from that spectacularly successful Dakar recovery mission. 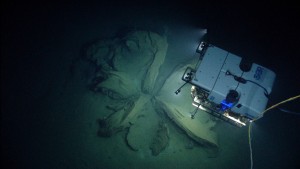 At a depth of nearly four miles, with four tons of crushing pressure on every square inch, in the pitch black of the deep ocean, the Remotely Operating Vehicle (ROV) Deep Discoverer lurks. Known as D2, the robot is operated by a team on the NOAA mother ship Okeanos, and via miles of cable sends back exquisite high-definition imagery from the unexplored seafloor. D2 is tethered to its sister vehicle, Seirios, which lights D2 from above and with its own cameras allows operators an expanded view of the ROV and its surroundings. Seirios in turn is dangled from Okeanos at the end of miles of steel-armored cable with a fiber-optic core. The cable provides power to the duo and is a conduit for communications and telemetry.

D2 illuminates its surroundings with brilliant LED lights, allowing its nine video cameras to capture an unparalleled view of the seafloor and close-up glimpses of the remarkable creatures that lurk there. And via telepresence, anyone, anywhere with an Internet connection can follow the excitement of discovery with scientists, watching it unfold as it happens. D2 can also grab samples of marine life and geology for further study topside.

The Nauticos-SeaWord team will be looking with great anticipation to seeing what D2 reveals when it dives on the Battle of Midway site near the end of its current mission to explore the Northwest Hawaiian Islands Marine National Monument in early March.

The NOAA Midway dives have been planned for March 5-7, subject to weather and other unforeseen circumstances that are a part of life at sea. Stay tuned for further details about how to follow this expedition. The vessel is currently in Hawaiian waters testing equipment in preparation for its main mission which will begin around February 23rd: Map

The Okeanos Explorer program is one of exploration and discovery, designed to achieve a first-look at the unknown seafloor that will inspire further research. It is a highly collaborative process that involves the entire science community, so that new discoveries are available to everyone. All data is shared in real-time during the cruise through telepresence. Educational outreach is a major component, and public access is encouraged, including through the SeaWord Foundation. The current mission is to explore the Papahānaumokuākea Marine National Monument, encompassing the waters around the Northwestern Hawaiian Islands. It is the single largest fully protected conservation area under the U.S. flag, and one of the largest marine conservation areas in the world. A UNESCO World Heritage Site, the preserve includes deep and shallow coral reefs, sea mounts harboring thousands of marine species, hundreds of islets home to 14 million seabirds, and cultural resources of importance to native Hawaiians as well as historians of World War II. 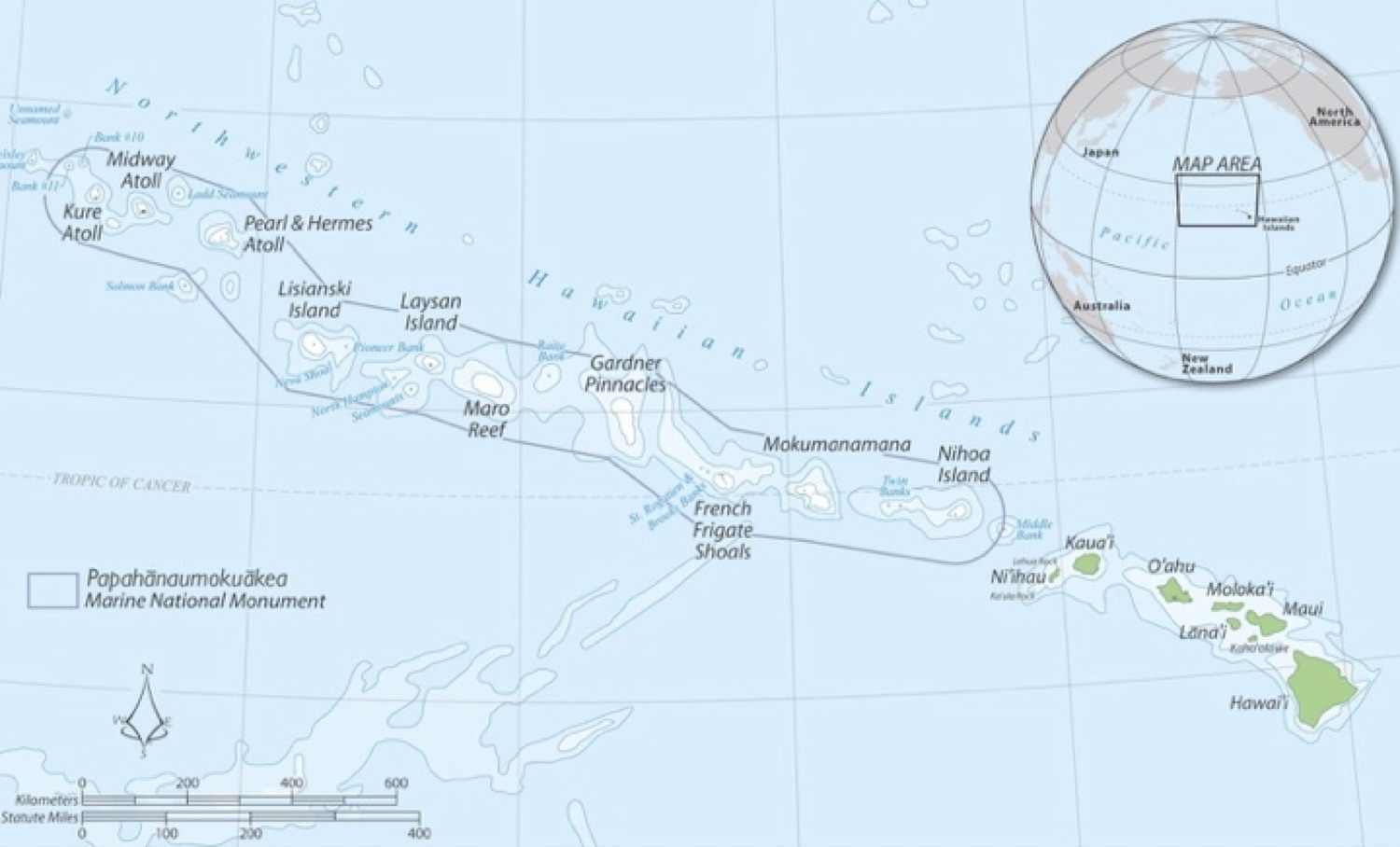