On the morning of July 2, 1937, Amelia Earhart and her navigator, Fred Noonan, took off in a Lockheed 10 Electra from Lae, New Guinea, heading east, having completed three-fourths of their planned flight around the world.  Their destination was Howland Island, a small U.S. territory 2,300 miles east of New Guinea.  Because of the difficulty of finding such a small target in the middle of the featureless Pacific, the U.S. Coast Guard had stationed the cutter Itasca at the island.  Its radio signals would help guide Earhart and Noonan in for what was to be a refueling stop before the next leg to Honolulu. 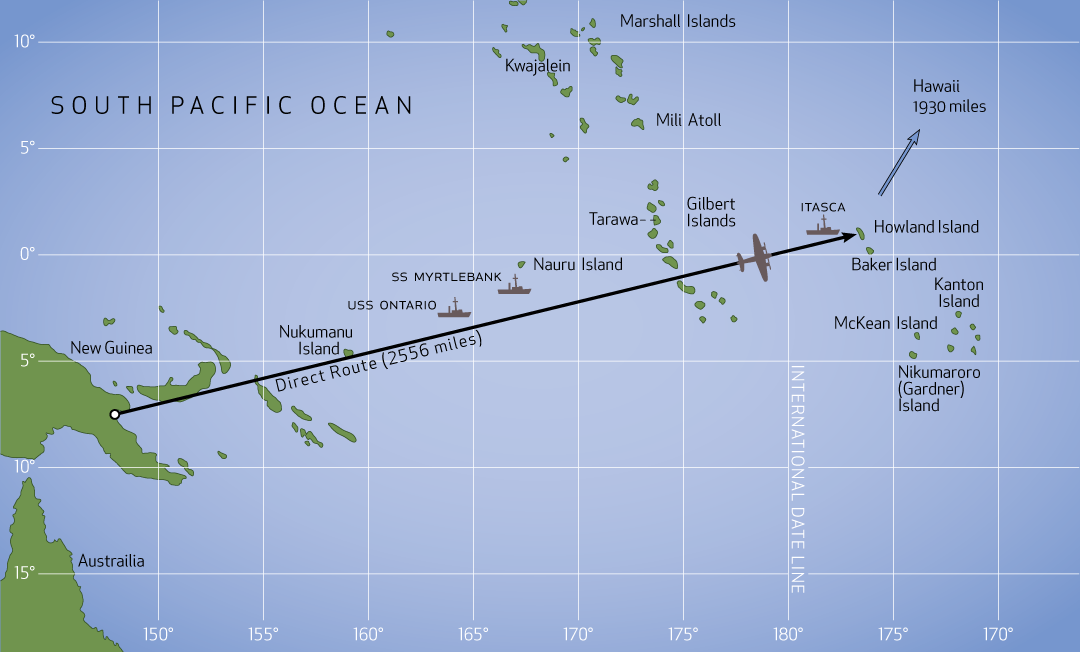 The following morning, as Earhart’s Electra approached Howland Island, the radiomen aboard the Itasca heard her calls for navigational help.  But, except for one brief contact, it was clear she could not hear their replies.  Unable to get a radio bearing, running low on fuel, and relying only on celestial navigation with outdated charts, Earhart and Noonan never arrived at Howland. Despite an intensive air and sea search led by the U.S. Navy and its aircraft carrier Lexington, no trace of the aircraft or its pilot and navigator were ever found.  After 16 days, the Navy gave up the search and declared Earhart and Noonan lost at sea.

Many Americans could not accept the Navy’s conclusion.

In the years since 1937, hundreds of amateur investigators have researched the case in the hope of finding the “true” solution to the mystery.  They have scoured her final radio transmission for clues, sought to unearth suspected government documents, investigated Earhart sightings and aircraft wrecks on islands throughout the Pacific, and written dozens of books advancing a profusion of theories, including the following:

• She was an American spy, captured and executed by the Japanese on the eve of World War II;

• She secretly returned to the U.S. and quietly lived out her life under an assumed name in Teaneck, New Jersey; and

• She landed on an uninhabited island and died there after being overlooked by the Navy.

These are just a few of the theories that have been proposed.  Though none has ever been proven, they have served to keep the mystery alive.  More than seven decades after she vanished, the question of Earhart’s fate continues to intrigue and fascinate people all over the world.

Despite these theories and legends the body of verifiable evidence shows that Earhart and her navigator, Fred Noonan, crashed at sea after missing tiny Howland Island, where they were planning to refuel.  The information and the technology exist to reconstruct Earhart’s final flight, search the ocean bottom in the area where we believe she came down, find the aircraft, and solve the mystery.

This is our quest.