An excerpt from the book, Last Flight by Amelia Earhart, published posthumously in 1937:

At the age of ten I saw my first airplane. It was sitting in a slightly enclosed area at the Iowa State Fair in Des Moines. It was a thing of rusty wire and wood and looked not at all interesting. One of the grown-ups who happened to be around pointed it out to me and said: “Look, dear, it flies .” I looked as directed but confess I was much more interested in an absurd hat made of an inverted peach-basket which I had just purchased for fifteen cents. 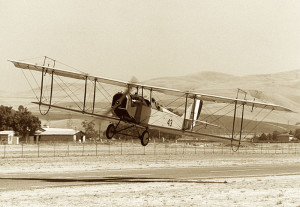 What psychoanalysts would make of this incident, in the light of subsequent behavior, I do not know. Today I loathe hats for more than a few minutes on the head and am sure I should pass by the niftiest creation if an airplane were anywhere around.

The next airplane which impinged upon my consciousness was about the time of the armistice. Again I found myself at a Fair, this time the great exposition held at Toronto in Canada. A young woman friend and I had gone to the Fair grounds to see an exhibition of stunt flying by one of the aces returned from the war. These men were the heroes of the hour. They were in demand at social teas, and to entertain crowds by giving stunting exhibitions. The airplanes they rode so gallantly to fame were as singular as they. For aviation in those days was very limited. About all a pilot could do was to joy-hop. That is (1) taking a few hardy passengers for short rides; (2) teaching even hardier students to fly; and (3) giving exhibitions.

The idea that airplanes could be transportation as today entered nobody’s noggin.

My friend and I, in order to see the show, planted ourselves in the middle of a clearing. We watched a small plane turn and twist in the air, black against the sky excepting when the afternoon sun caught the scarlet of its wings. After fifteen or twenty minutes of stunting, the pilot began to dive at the crowd. Looking back as a pilot I think I understand why. He was bored. He had looped and rolled and spun and finished his little bag of tricks, and there was nothing left to do but watch the people on the ground running as he swooped close to them.

Pilots, in 1918, to relieve the monotony of never going anywhere, rolled their wheels on the top of moving freight trains; flew so low over boats that the terrified occupants lay flat on the deck; or they dived at crowds on the beach or at picnics. Today of course the Department of Commerce would ground a pilot for such antics.

I am sure the sight of two young women alone made a tempting target for the pilot. I am sure he said to himself, “Watch me make them scamper.”

After a few attempts one did but the other stood her ground. I remember the mingled fear and pleasure which surged over me as I watched that small plane at the top of its earthward swoop. Common sense told me if something went wrong with the mechanism, or if the pilot lost control, he, the airplane and I would be rolled up in a ball together. I did not understand it at the time but I believe that little red airplane said something to me as it swished by.